Leigh hails from Melton Mowbray in Leicestershire and after earning his stripes with the local town band he came under the wing of Geoff Whitham at the Ancient Order of Foresters Band at 16 years of age.

Geoff was to continue to mentor Leigh in euphonium playing at Huddersfield Polytechnic (now University) when he studied there (majoring in performance) from 1988-92.

Leigh joined the Brighouse and Rastrick Band on euphonium in 1990, but it was on Solo Baritone that Leigh really made his mark. His illustrious playing career with Brighouse lasted 19 years and including National and European victories.

Leigh’s composing and arranging work is prolific and his award winning (including 2 Brass in Concert awards), entertaining music is featured by many bands throughout the world and is widely published by a variety of publishing houses.

Since retiring from playing in 2009 Leigh has been able to concentrate on his conducting career. His work with a host of bands such as South Yorkshire Police Band, Thoresby Colliery, Staffordshire and Milnrow bands lead to successful spells leading Carlton Main FrickleyColliery and Leyland Band and a year as Resident Conductor of the Brighouse and Rastrick Band.
He was appointed Musical Director of the Hepworth Band in January 2017 but returned to his spiritual and musical home at SYP band in June 2018.

Leigh is enjoying adjudicating at a variety of competitions and festivals (including the majority of regional contests and Butlins Mineworkers) and is a member of the Association of Brass Band Adjudicators.

His post as Head of Music at a busy high school in Huddersfield and being married with 3 children, keeps Leigh busy alongside his musical activities! 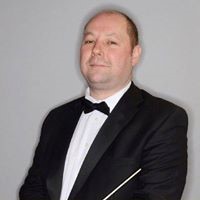